We provide practical and creative solutions to workplace issues. For 2020, 2021, 2022 and 2023, Diane Seltzer was peer rated as a Maryland Super Lawyer and as a Washington, D.C. Super Lawyer through Thomson Reuters.  In Bethesda Magazine’s 2019 and 2021 surveys, her peers selected her as one of the area’s Top Employment Law attorneys.

Diane Seltzer was elected to the Board of Governors of the D.C. Bar for the 2021-2024 term after serving as its Secretary for the 2020-2021 term.  Currently, she serves on the Board’s Executive Committee and on its Budget Committee.  She was also appointed Vice-Chair of the American Bar Association’s Solo, Small Firm & General Practice Division’s Litigation Committee for its 2021 term and was reappointed for its 2022 and 2023 terms.

She regularly represents and advises employers and employees in all aspects of employment law and litigation. The scope of her work includes:

Diane Seltzer personally designed and developed the Human Resources Compliance course for American University Washington College of Law’s online Master of Legal Studies degree program, and she has taught the course numerous times since it launched in Spring 2020.  She has been an Adjunct Professor of Law for American University Washington College of Law since 2003 and has taught upper level employment law courses including “Employment Discrimination” and “Employment Law: the Employment Relationship.”

Ms. Seltzer serves as a mediator for parties facing employment disputes.  Because she represents both employers and employees, she is uniquely qualified to understand each of their perspectives. She utilizes this insight during mediations and thus is not perceived as being biased towards one side.

She is on the Faculty Board of the American University Washington College of Law Labor and Employment Law Forum.

Ms. Seltzer is an avid volunteer with the D.C. Bar, which has over 113,000 members and is the largest unified bar in the United States.  She currently serves on the D.C. Bar’s Continuing Legal Education (CLE) Committee and previously served as Chair (2016-2017), Vice Chair (2015-2016), and Committee member (2012-2015, 2018-2022).  The CLE Program of the D.C. Bar offered 224 courses in FY 2021-2022 that were taught by over 290 volunteer faculty.  Over 7,100 lawyers attend these courses annually, and all courses fulfill mandatory/minimum accreditation requirements of the 46 states that have such requirements. Ms. Seltzer teaches numerous courses each year for the D.C. Bar’s CLE Program.

Diane Seltzer has served on the Steering Committee of the National Capital Region’s 9/11 Memorial Stair Climb. Hosted by the Prince George’s County Fire/EMS Department, the Stair Climb is a way to honor and remember the FDNY firefighters who gave their lives on September 11, 2001. Each participant pays tribute to an FDNY firefighter by climbing or walking the equivalent of the 110 stories of the World Trade Center. The granddaughter of an FDNY Lieutenant, she takes immense pleasure in assisting firefighters, EMTs, and police officers in obtaining, or being reinstated to, positions from which they were unlawfully prohibited from holding due to their disabilities, religious beliefs, gender, prior EEO activity, and other protected characteristics. In July 2010, Diane Seltzer became certified as a Maryland Emergency Medical Technician (EMT-B) and served until June 2012 as a volunteer with the Glen Echo Fire Department in Bethesda, Maryland.

In July 2019, Diane Seltzer accepted the invitation of Free Mom Hugs to serve as its Chapter Leader for the Washington, DC chapter and served in that capacity for 3 years.  Free Mom Hugs is a registered non-profit organization made up of parents and allies of the LGBTQ+ community.  The organization is dedicated to affirming, celebrating, and advocating for equality for the LGBTQ+ community.

From 2004 until 2006, Ms. Seltzer served on the Board of Directors of National Capital Housing Management Corporation, a non-profit organization that provides and promotes affordable fair housing for senior citizens and disabled adults of low to moderate income. 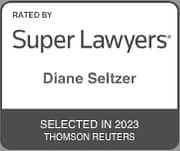 SEE MORE OF DIANE IN THE MEDIA